They brought us the Pease Greeters, have maintained memorials and brought joy, comfort and help to many Marines and military families.  The Seacoast Detachment #394 Marine Corp League has made an indelible mark on New England and the seacoast.
Tonight, they celebrated their 70th anniversary just outside the Navy Yard Gates with a dinner gala of great food and outstanding service provided by Warren’s Lobster House.

The salty air blew in from the sea and site where the Ranger Detachment 394 Marine Corp League found roots on May 25th, 1948 with Marines who had been stationed in Portsmouth, NH.
The Seacoast Marines, the dedicated few gathered for an evening and listened as members, family and supporters saluted an esteemed 70 year history in service to the military families in New Hampshire.

The guests admired the 70th Anniversary coin designed by Detachment Marine Jeff Strayer, as they found their seats at Warren’s in Kittery.

The  Winnacunnet MC JROTC posted the colors and retreated before a table full of memorabilia, scrapbooks from years past and memories made by Seacoast Marines.
Detachment Commandant Roland Morin welcomed the members and guests, presented awards and recognition to several deserving attendees, and acknowledged the thousands of hours of community service accomplished by the Winnacunnet H.S. MCJROTC. Past Commandant Dennis Lynch shared a toast to history and an ever growing legacy giving thanks to many in the room.
The Marine Corps League National chartered the Detachments in the Seacoast 4 times: 1948 Ranger in Portsmouth, 1977 Seacoast in Maine, 1984 Seacoast in Kittery Maine and 2005 Seacoast serving Rockingham, Strafford and coastal York counties under the Department of New Hampshire.
“By the second year of their first organizational meeting, these Marines had chartered, acquired colors, held their first Marine Corp ball, restored a vandalized memorial, started a scholarship fund and sent two representatives to National (MCL Convention).  Those guys accomplished a lot in a short period of time.”
Morin, enlightened the audience with more details of the then one of only a handful of Marine Corp League detachments in New England.  He then took care of some unfinished business with the League’s eldest member, Fred Getchall, 98.
Among the first 4000 Life Members of the Marine Corps League, Fred never received his national certificate of membership.  The League delivered it this night to a heartwarming crowd of proud observers pleased to see Getchall receive this long awaited document.
The Seacoast Marine Corp League has enjoyed the camaraderie and leadership of many honored members over the years.  The ranks have included several heroes including Korean War veterans Charlie Smith and Lee Wilkenson, survivors among the The Frozen Chosen from the Battle of Chosin Reservoir.  There they served among 30,000 UN forces against 120,000 Chinese troops during a brutal 17 day battle in freezing weather.
Detachment Chaplain Geoff Corson shares highlights from his research on the league through the 80’s.

“When the Detachment held its 4 th (Marine Corp Ball), the 205 th Birthday of the Marine Corps, the guest of

honor was former Private Bennie Rintz who was 96 at the time. In 1905, Bennie was transferred from the Battleship USS TEXAS and reported to Portsmouth Navy Yard for guard duty. During his tour at the yard, the United States hosted peace talks between the Russians and Japanese to end the Russo-Japanese War that went on from 1904-1905. The talks took place at Portsmouth u
As is the practice to this day, the Detachment stayed busy supporting multiple Memorial Day, Veterans Day and town events such as Market Square Day and the Stratham Fair.”nder the watchful eyes of Private Bennie Rintz, USMC. Bennie shared his remembrances of the Corps and especially of the delicious baked beans he used to eat in the chow hall as some of the best times of his life. When Bennie got out, he became a tailor and retired in the Seacoast area. At the ball, Bennie was presented a Good Conduct Medal, Cuban Pacification Medal, a Marine Corps League cover and a Detachment membership card. Bennie became the oldest member of the Detachment that day.

Over the years the Detachment has felt the ebb and flow of membership, duty and honor to those who serve and serve the League.   The League’s effort is significant where men and women come and go from the home-front to war through Pease Airforce Base.

Frank Wisinski receives award for his service to the League.  Under Frank’s leadership the MCL started the Pease Greeeters, who give hope and love to departing service people and welcome them home when they return.

Past Commandant and the second eldest member at 85, “Frank Wisinski saved the detachment from oblivion in 2003.”  reverently reports Det. Cmdt. Morin.
In 2005, under Frank Wisinski’s leadership, Bill Hopper, Pease Airport manager informed the League that Pease is often the destination for traveling servicemen and women as their airships stop to refuel.    With this insight the Seacoast Marines started the Pease Greeters bringing together military and family supporters of New Hampshire regularly throughout the year.
“Among the current members, 23 joined in 2007.  From 2005-2010 we got lots of new, quality members thanks to Frank and Ed Johnson.”   Wisinski noted for his acrobatics, accepted an award as the MCL  applauded his leadership at the turn of the millennia.
“In 1948 we put a footprint in this community.  It’s our responsibility to support Marines and their families on the seacoast.”  affirms Det. Cmdt. Roland Morin.
The league has held the same meeting time since 1979 to today-every second Monday of the month at 1900 hours.
“Not unlike many veterans service organizations, membership is dwindling.” says Morin.
But unlike most VSOs, this one is all Marines and their families in service to New Hampshire and the service members who come through here.  For the members and those who know the heart of a Marine, there is an understanding of what is expected, what is needed and what it means to be a part of the Marine Corp family and its League.

So if you are a Marine, a Marine family member or supporter, visit us, join our ranks and help us meet the responsibility of fulfilling our duties here on the Seacoast with the oldest Marine Corp League here in New England. 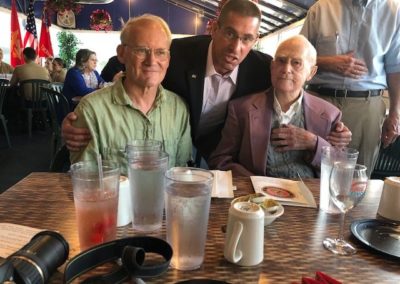 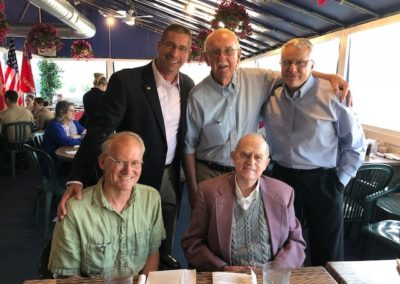 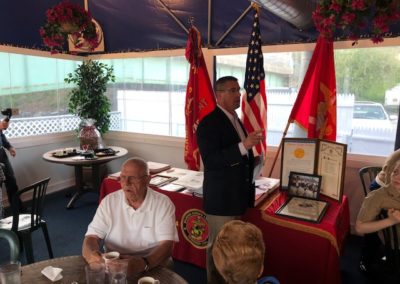 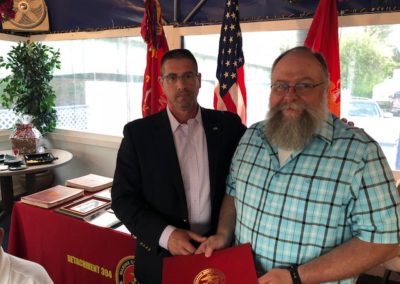 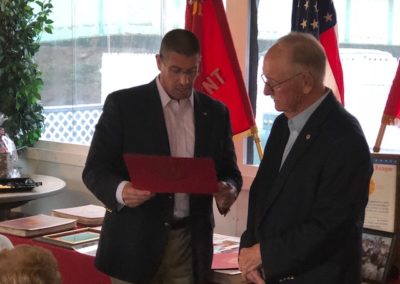 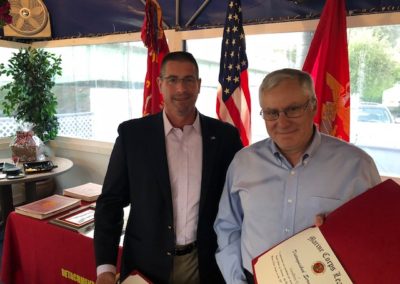 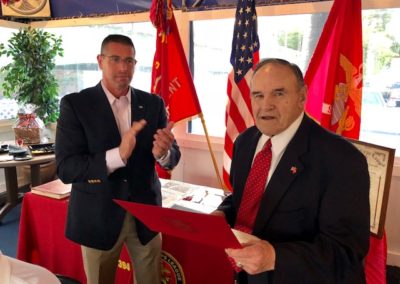 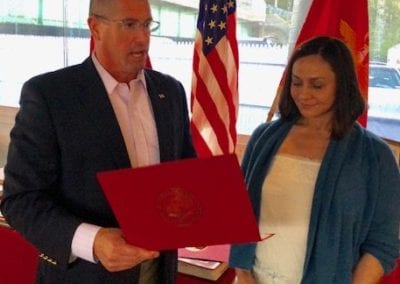 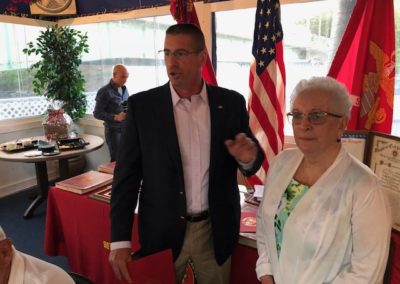 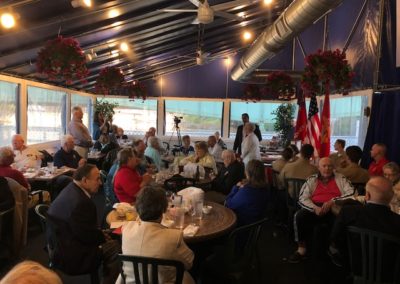 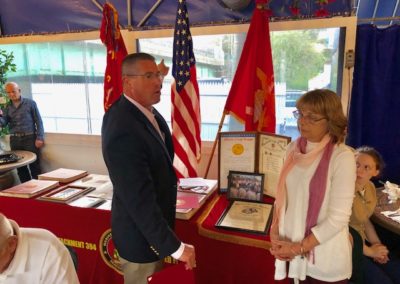 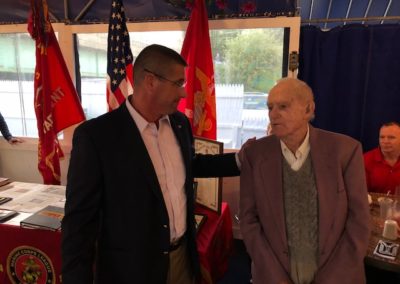 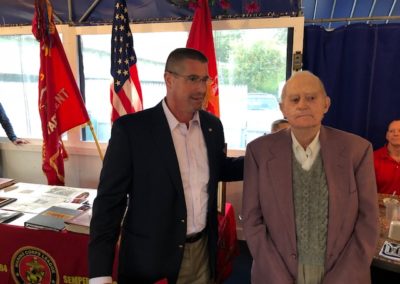 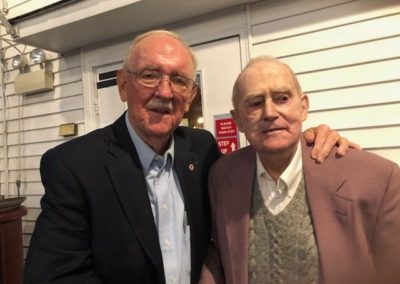 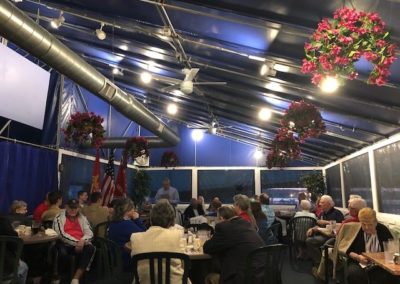